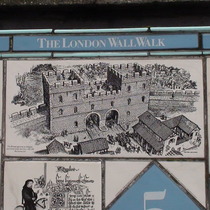 This Alan Eisen flickr page will take you on a walk of the Wall, showing many...

Newgate was the western exit through the Roman London Wall. In later years th...

This gate was made in the London Wall early in the 15th century to allow acce...