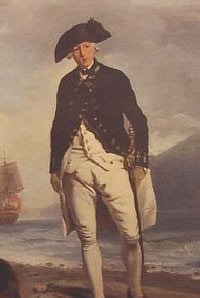 Founder and first governor of Australia. Born in the ward of Bread Street. Entered the Royal Navy 1753.

In 1787 he led a fleet of 11 ships, with a complement of four companies of marines as well as 750 male and female convicts, to Australia where he founded Australia's first penal settlement. The following year he landed at Botany Bay where he established the first settlement in Australia, Sydney, and the colony of New South Wales, of which he became the first Governor.

London Details has a good post on this man and his monument.

Philip's management of the relations with indigenous peoples was erratic, at times he attempted friendship but he also kidnapped warriors.

This section lists the memorials where the subject on this page is commemorated:
Admiral Arthur Phillip

The battalion is unique, in that although officially part of The Queens Regim...