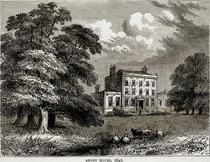 The house was built in 1700 and we understand it was close to Stoke Newington Church Street (rather than set back in the grounds). Lady Abney inherited the Manor of Stoke Newington in 1701 from her brother Thomas Gunston. Another image of the house, dated c.1800, is captioned 'Mr. Gunston's, Newington'.

Initially Sir Thomas Abney and his wife lived there only part-time but on his death in 1722 she moved there permanently and laid out Abney Park assisted by Dr Isaac Watts, who continued to live there, and the neighbouring Hartopp family. In about 1838 the house became a Wesleyan seminary but in 1843 it was demolished and the materials used for constructions elsewhere.

Our image apparently shows the house in 1845 when it must have been just the shell waiting to be demolished. The Park was opened as a cemetery in 1840, so it's possible the house demolition took place while burials were going on. The Abney Park Cemetery Company went bankrupt in the 1970s and the cemetery fell into disrepair and was abandoned. In 1980 Hackney Council took it on and it is now managed in partnership with Abney Park Trust.

The history of the neighbouring house, to the east, Fleetwood House, is interesting and says that the grounds of that house and the next one to the east as well, were also acquired for the cemetery.

Abney Park has: "Uniquely in London, Abney was also originally laid out as an arboretum, with 2,500 varieties of plants. An alphabetical planting of tree species was set out around the perimeter along with collections of oaks, thorns, pine and others within."

This section lists the memorials where the subject on this page is commemorated:
Abney House and Park

In the mid-eighteenth century, The Limes was one of the largest houses in Lew...

Builder. Born in Clerkenwell, the son of a carpenter, Isaac, from Cumberland....

Built before 1805 by James Burton, the property developer, who probably lived...

Getty's picture caption is: "Crowley House on the River Thames at Greenwich, ...