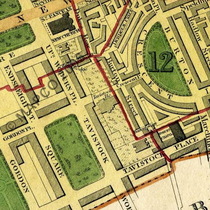 Built before 1805 by James Burton, the property developer, who probably lived here while developing the surrounding area. The 1834 Davies & Bartlett map shows the house surrounded by the regular terraced housing that Burton put up around it. Charles Dickens and his family lived here 1851 - 1860. By the time they moved in the house had been divided into 2 or 3 parts, the Dickenses taking the western part. In 1858, while living here, Dickens left his wife, Catherine. Demolished 1901.

All this information comes from Wikipedia but their image of the house (from The Victorian Web) seems wrong. It depicts a house in the Georgian terraced house style. Surely the front of the house on the map, clearly labelled as "Tavistock House" could not have looked like that? The image does not even look right on its own merits - houses of this date have arched windows (if any) on the ground floor, not the third, and the windows tend to decrease in size on the higher floors - these are all the same size; for a good example see James Burton's nearby Cartwright Gardens (1809–1820).

This section lists the memorials where the subject on this page is commemorated:
Tavistock House

Its name derives from the fact that it was situated by the tow path on the Th...