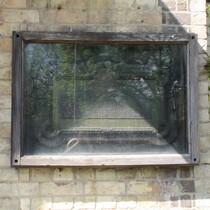 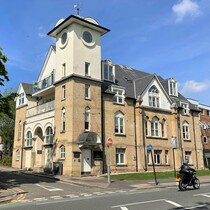 Woodford Green Men's Club
This memorial was erected to honour the memory of those members who made the supreme sacrifice for their country in the Great War 1914 – 1918.
{List of 12 names in alphabetical sequence.}

This plaque is very decorative,with an ornate frame, at the top of which is a roundel showing a stag on a shield. It was perhaps not intended to be placed outside so it is protected with glass, which makes it nigh impossible to photograph on a sunny day. We think this plaque was originally erected shortly after the war inside another building that the Club was using at the time. And that it was re-erected here, outside, when the Club relocated.

The list of names is in alphabetical sequence except that Silver is at the end. However the layout of the list (4 columns of 3) means it is not clear whether Silver was a last-minute addition or not.

This was built as a chapel for independent Wesleyans in 1869.  A replacement church was built elsewhere in 1904 and this building was bought by Sir J. R. Roberts, who presented it for public use.  by 1965 it was in use by the Club.  Bucks Free Press describes the residential accommodation that it became in 2005.

The ornate underneath of the door canopy includes a monogram: "WMC" for Wesleyan Methodists Chapel.

The Roberts plaque is the left of the door, WW1 to the right.

This section lists the subjects commemorated on the memorial on this page:
Woodford Green Men's Club - WW1

This section lists the subjects who helped to create/erect the memorial on this page:
Woodford Green Men's Club - WW1

Either the club or its Harrier section was established in 1904.  Its origins ...

This section lists the other memorials at the same location as the memorial on this page:
Woodford Green Men's Club - WW1