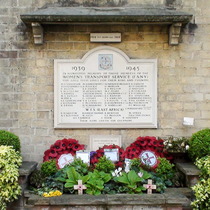 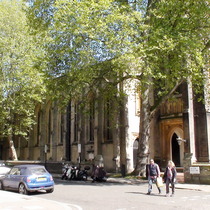 {On the main plaque:}
1939 – 1945
In honoured memory of those members of the Women’s Transport Service (FANY) who gave their lives for their King and country.

{a list of 41 names in alphabetical order. See Subjects commemorated for the names.}
{against Bradford:}
in Japan, 7.3.1947

Their name liveth for evermore.

We like the bespoke layout of this plaque: the medals, the maiden-name, the "in Japan", all fitted in, one way or another, achieving a pleasing balance.

The St Pauls website says "In 1900, Lady Randolph Churchill {widow of Lord Randolph Churchill} married Captain George Cornwallis-West and the register today has the signature of the witness, her son Winston.  Services were held throughout the war and even extended to being held in the Knightsbridge tube station. At this time, the vicarage was lent rent-free to FANY (First Aid Nursing Yeomanry) many who served behind enemy lines and included the undercover agent Odette." This is interesting enough but doesn't really explain the connection of FANY to this church.

This section lists the subjects commemorated on the memorial on this page:
Women's Transport Service (FANY)

members of Women’s Transport Service (FANY) who died in wars

Those members of the Women’s Transport Service (FANY) who gave their lives fo...

{Around the base of the memorial:}Remember the men of Richmond who gave their...