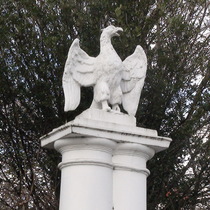 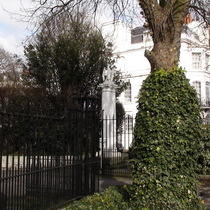 British History Online refers to this feature as “An eagle on a double Tuscan column, of unknown origin, stands in front of a garden…”. So, no date, no sculptor, no commissioner. Let’s get stuck in…

Orme Square is named after its developer, Edward Orme - see there for his Russian connections.

The monument's form, a double classical column, suggests a 19th century date. The bird is surely an eagle. So, it could be an Imperial Eagle, but which one: Roman, Eastern, Russian, Holy Roman, French, Nazi? Or the American eagle? Or is it just a bird at the top of a pole?

Taking the date and the location into account two of these suggestions deserve serious consideration: First: the Russian Imperial Eagle. Orme’s reported connections with the Russian Tzar supports this suggestion but the Russian Eagle pretty consistently has two heads, while the Orme eagle has the more usual one. The double pillar doesn't make up for a missing head.

Second: the French Imperial Eagle. With Napoleon finally defeated in 1815, and two of his armies’ eagles captured and brought to London, Orme could have erected this eagle to commemorate that great victory. The French Imperial Eagle has only one head and stands on a plinth. So far so good. But one claw should be resting on Jupiter’s spindle (indicating fate). The Orme eagle has forgotten his spindle.

There is a story about the Tzar and gravel (see Orme's page) which gives strong support to the Russian eagle explanation.

We've left the memorial in puzzle corner because we would still like a date and a sculptor.

London has, at least, two more eagles on columns: the RAF monument and at Eagle Squadrons.

This section lists the subjects commemorated on the memorial on this page:
Orme Square eagle

This section lists the subjects who helped to create/erect the memorial on this page:
Orme Square eagle