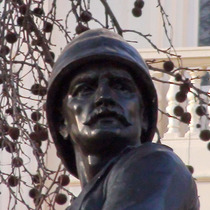 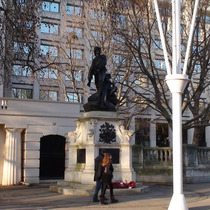 {In large brass letters laid in the ground in a circle around the monument:}
This memorial was rededicated in October 2000 in honour of all Royal Marines who have served their country by land and sea and who are forever remembered by their friends.

{On a brass plaque attached to the front of the plinth:}
Erected by the officers and men of the Royal Marines in memory of their comrades who were killed in action or died of wounds or disease in South Africa and China, 1899 - 1900.

{There are (not terribly good) bronze reliefs on two sides of the plinth, showing the Repulse of the Chinese attack on the Peking legation and the action at Graspan in South Africa. One is inscribed:}
Adrian Jones 1902
{The other has a much less legible inscription that probably reads the same.}

{The brass plaque on the back of the plinth lists 70 men lost in either South Africa or China. The names are listed at Subjects Commemorated.}

The statue and the reliefs are by Jones with Jackson responsible for the architectural elements.

We found the quality of the work on the reliefs rather poor but Ornamental Passions has examined them closely and is more appreciative. There we learn that the inscription we could not read is about the defence of the International Legations in the Boxer Rebellion.

Originally on the south side of The Mall this monument was removed to storage when the Admiralty Citadel (the vine-covered bunker) was erected in 1940-1. It was erected on its present site in 1948. In 2000 it was rededicated as the national monument for the Marines and unveiled by the Duke of Edinburgh, the Captain General of the Royal Marines.

This section lists the subjects commemorated on the memorial on this page:
Royal Marines

Killed in action or died of wounds or disease.

This section lists the subjects who helped to create/erect the memorial on this page:
Royal Marines