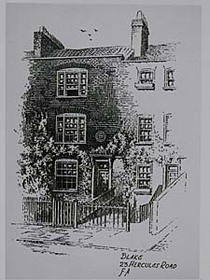 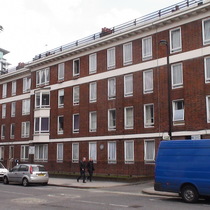 This plaque, shown in both this drawing (by Adcock from Culture 24) and the photo of the house, was lost when the building was demolished in 1918, unless someone rescued it?

Blake lived here with his wife, Catherine, throughout the 1790s. The address was "13 Hercules Buildings". By 1912 it had been renumbered 23. The 1827 Greenwood map shows 'Hercules Buildings' was the terrace of small houses on the south side of Hercules Road between what are now Cosser Street and Kennington Road.

From Culture 24: In 2015 the Ashmolean in Oxford held an exhibition about Blake's studio here. Michael Phillips recreated "the original studio using a combination of the archival blueprints and contemporary descriptions of the interior." "The plans should give him a good start; they clearly show the ground floor and Blake’s etching and painting studio - referred to as “Blake’s atelier”, looking out onto the back garden and the outside privy. The front ground floor of the building is marked as a printmaking workshop with rolling press." The Ashmolean provides an image of the plans.

Poetry Foundation relates an incident that happened at this house: "One story told by Blake's friend Thomas Butts shows how much the Blakes enjoyed the pastoral surroundings of Lambeth. At the end of Blake's garden was a small summer house, and coming to call on the Blakes one day Butts was shocked to find the couple stark naked: "Come in!" cried Blake; "it's only Adam and Eve you know!" The Blakes were reciting passages from Paradise Lost, apparently "in character.""

Londonist have some lovely photos of Blake mosaics in the nearby Carlisle Lane, Virgil Street and Centaur Street railway arches.

This section lists the subjects commemorated on the memorial on this page:
William Blake - SE1 - lost plaque

This section lists the other memorials at the same location as the memorial on this page:
William Blake - SE1 - lost plaque

Unveiled as part of Westminster's 50th anniversary commemorations marking the...

This building was opened on 28 May 1957 by Her Majesty Queen Elizabeth the Qu...