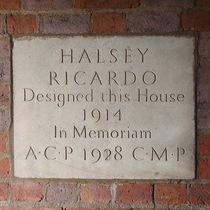 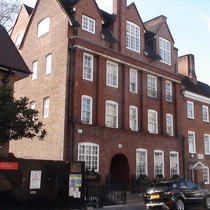 From The Modernists Journals Project we lean that this house was "designed by Halsey Ricardo for his daughter Anna ... and Maresco when they married" and that in 1953 their daughter Naomi was a student at the Central School of Arts and Crafts and living with her parents in this house which was full of with works of art.

The plaque, inside the porch on the left wall, was erected by the Pearces (ACP and CMP) in 1928, the year Ricardo died.

At RIBAPix and again you can see Ricardo's drawings for this house.

We've found a few other architects who built houses for themselves (in Ricardo's case, for his daughter), listed at Geoffrey Darke.

This section lists the subjects commemorated on the memorial on this page:
Halsey Ricardo

This section lists the subjects who helped to create/erect the memorial on this page:
Halsey Ricardo

Born Anna Catherine Ricardo on 9 April 1889, her birth was registered in the ...

The photograph of the plaque is taken from Derek Sumeray's book 'Discovering ...

The Cherub GateThe cherub above is a gift to Trinity Church from the church o...

The period that Epstein and his company, NEMS, occupied these offices was fro...