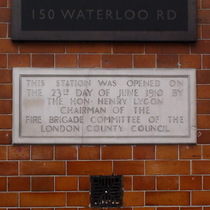 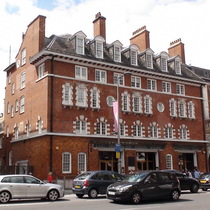 This station was opened on the 23rd day of June 1910 by the Hon. Henry Lygon, Chairman of the Fire Brigade Committee of the London County Council.

When we first visited in 2016 the building was undergoing renovations and was surrounded by hoardings, which sported a useful information panel:
"The former Waterloo Road Fire Station is a Grade II listed building. It was one of a series of fire stations built by the LCC between 1896 and 1914, which are widely admired as being among the most accomplished achievements of this exceptionally rich and prolific period of LCC civic architecture, it was possibly built by HFT Cooper under the superintendence of Owen Fleming {architect (1867-1955)} and Charles Canning Winmill {architect (1865-1945)}.
The materials used in the building consisted of: lower storey of brown glazed brick on a granite base; upper floors of red brick with Portland stone dressings; slated mansard roof. On the ground floor are segmental-headed sash windows and three asymmetrically placed vehicular entrances with folding doors and a lettered frieze in two sections above, reading LCC FIRE BRIGADE STATION ad 1910 and WATERLOO ROAD.
A date stone announcing the opening of the fire station is located between the double doors beneath the LCC frieze.
By 1986 its original use had ceased, and the building had become the headquarters of the London Ambulance Service. The latter subsequently transferred its headquarters to a new building further down Waterloo Road. The building was then converted into a restaurant and bar, known as The Fire Station, with offices on the upper floors."

This section lists the subjects commemorated on the memorial on this page:
Waterloo Road Fire Station

This section lists the subjects who helped to create/erect the memorial on this page:
Waterloo Road Fire Station