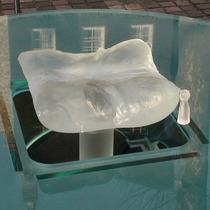 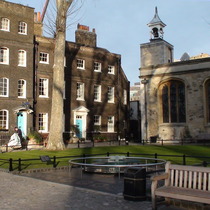 {Around the edge of the lower black circle:}
Gentle visitor pause a while, where you stand death cut away the light of many days. Here jewelled names were broken from the vivid thread of life. May they rest in peace while we walk the generations around their strife and courage under these restless skies.

{Around the edge of the upper glass circle:}
Close to this site were executed:
{a list of 10 names each with the year of execution, in date sequence. For the names see the Subjects commemorated list.}

Catling wrote the poem as well as creating the sculpture. Doesn't that cushion look lovely and comfy - just the place to lay a weary head. From photos on the web we see that a tassel used to dangle at all four corners. We can't discover who was honoured to unveil this art-work. It really demands a queen but perhaps the PR department at the Palace felt it was an inappropriate association.

Following the Black Watch executions in the mid 18th century the executioner had a quiet life until WW1 when 11 German spies were executed here by firing squad. The last person executed here was a WW2 German spy.

This section lists the subjects commemorated on the memorial on this page:
Tower of London execution site

Born Jane Parker, a distant relative of Henry VIII, she became a lady-in-wait...

This section lists the subjects who helped to create/erect the memorial on this page:
Tower of London execution site

This section lists the other memorials at the same location as the memorial on this page:
Tower of London execution site

{Below an image of the Olympic torch:}A gift from the people of ancient Olymp...