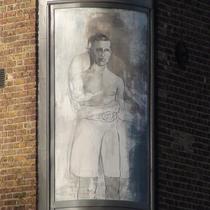 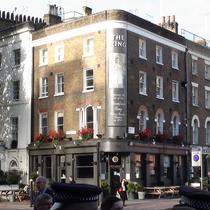 The Surrey Chapel which became used as a boxing ring stood at this junction diagonally opposite this pub, on the site now occupied by TfL, the rather snazzy Palastra House. Nicely named since a 'palastra' was in ancient Greece and Rome a public place devoted to the training of wrestlers and other athletes. We are not sure when this pub was renamed 'The Ring'.

The policemen in the foreground are explained because we snapped this memorial while attending a cycling protest outside the offices TfL. Never off duty - that's us.

This section lists the subjects commemorated on the memorial on this page:
The Ring pub

Francis Fowke designed the buildings for the 1862 International Exhibition in...

{Plaque on the horizontal surface of the stone bench:} In memory of Squadron ...