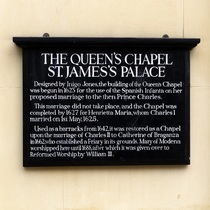 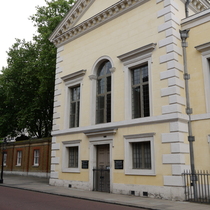 The Queen's Chapel, St. James's Palace
Designed by Inigo Jones, the búilding of the Queen's Chapel was begun in 1623 for the use of the Spanish Infanta on her proposed marriage to the then Prince Charles.
This marriage did not take place, and the chapel was completed by 1627 for Henrietta Maria, whom Charles I married on 1st May, 1625.
Used as a barracks from 1642, it was restored as a chapel upon the marriage of Charles II to Catherine of Braganza in 1662, who established a friary in its grounds. Mary of Modena worshipped here until 1688, after which it was given over to reformed worship by William III.

The plaque is the one on the right.

This section lists the subjects commemorated on the memorial on this page:
The Queen's Chapel