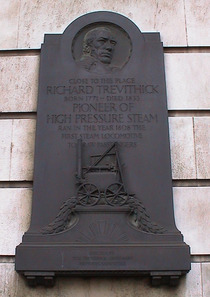 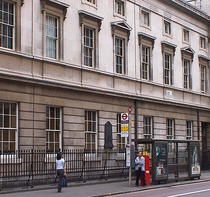 The world’s first passenger-carrying railway was opened in Euston Square, or possibly Gower Street. It went round in a circle and cost a shilling per go.

At the time of the unveiling Stanley was the Minister for Transport.

This section lists the subjects commemorated on the memorial on this page:
Richard Trevithick

This section lists the subjects who helped to create/erect the memorial on this page:
Richard Trevithick

Sculptor. Leonard Stanford Merrifield was born in Gloucestershire. After trai...

Second son of the 17th Earl of Derby. Conservative politician. Died at home i...

Royalty Mansions was built in 1908 as flats with workrooms for tailors. It w...