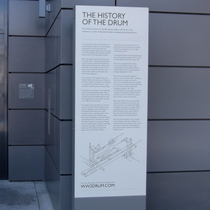 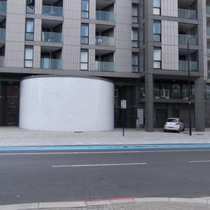 {Above a diagram of the tunnels:}
The History of the Drum
The circular structure on the left, known locally as the ‘Drum’ is the entrance to a series of deep-level tunnels completed during World War II.
In the early years of the war the population of London had been subjected to many bombings during the ‘Blitz’ and the government was becoming increasingly concerned for their safety, as the flimsy Anderson garden shelters offered little protection from high-explosive bombs. Some tube stations were already being used for shelter when in 1940 the government and London Transport started the excavation of additional deep-level tunnels as shelters from the bombs. It was thought that, after the war, these could be joined up to provide a new express tube parallel to the Northern Line, but this never happened. On 21 October 1942 Clapham South and Clapham North deep shelters were fitted out and made available to the public. From planning to opening took less than two years – most impressive considering they were dug by hand. The shelters were divided into two decks that could accommodate 8,000 people in bunks. Access was primarily by stairs rather than lifts as studies showed that 8,000 people per hour could negotiate stairs whereas lifts could only carry 1,000 in the same period. The design incorporated shafts of reinforced concrete with steel reinforced pillboxes (the ‘Drums’), designed to prevent flooding from any shattered drains above. Each shelter consisted of a pair of parallel tunnels 16 feet 6 inches in diameter and 1,200 feet long. The tunnels were slightly curved, with ancillary tunnels linking them to lift shafts. Air entered the shelter through the entrances and flowed down the spiral staircases along the connecting tunnels into the shelter area. Stale air was sucked out of the shelter through metal pipes in the roof and under the floor. Canteens were provided with cakes and sandwiches that were prepared by London Transport and delivered on trains called ‘refreshment specials’. The deep-level shelters proved invaluable when the capital became the target of the V1 and V2 rocket-propelled flying bombs during 1943. After the war Clapham South shelter was used for billeting troops, as hotel accommodation for the Festival of Britain in 1951, and for visitors to the Coronation of Queen Elizabeth II in 1953. By far the most historically significant post-war use of the deep shelter at Clapham South was as the temporary home for the very first immigrants from the Caribbean who arrived on the ship MV Empire Windrush. En route from Australia, the ship called at Kingston, Jamaica in May 1948. An advertisement had previously been placed in Jamaica’s Daily Gleaner offering transport to Britain, for a fare of £28.10s, for anyone who wanted to come and work here. Many of the 492 who arrived in June 1948 already had somewhere to go and live, but those who didn’t were bussed from Tilbury to Clapham and housed in the deep shelters at Clapham South. Many found jobs in the National Health Service, some worked in factories and mills locally, but by far the largest employer was London Transport. The actual time the shelters were occupied by the immigrants from the Caribbean was relatively short, but the impact of their arrival on the area was dramatic and long-lasting – the origins of today’s multi-racial community in South London.

For more information on this historic structure visit www.drum.com {This was flagged as potentially dangerous when we tried to access it.}

This section lists the subjects commemorated on the memorial on this page:
The Drum

Wikipedia questions the veracity of this plaque, while acknowledging that Ho ...