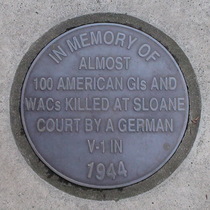 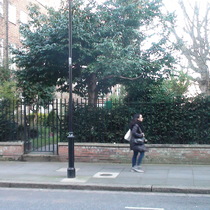 Refer to Sloane Court East V1 bomb for info about the event. The number of dead is not accurate on either plaque. At the time the death toll was kept as quiet as possible for reasons of morale, so the facts were not readily to hand. We have accepted, gratefully, the results of London Memorial's researches.  For summary info about the military dead refer to American servicemen killed at Sloane Court East. For the names of the 65 American servicemen we refer you to London Memorial.

From London Memorial: This plaque was funded by "Louis Baer of California, who had missed the Sloane Court bombing having decided to stop for tea on his way back to his billet".

This event is memorialised by two plaques, just far enough apart for us to have them on separate pages: this pavement plaque and this wall plaque. Oddly both are in Turk's Row, though all the destroyed buildings were in Sloane Court East. We think we've understood why the wall plaque is where it is but the location of this pavement plaque still seems odd. Perhaps those responsible for siting it only knew that the bomb had affected the top end of Sloane Court, and were not aware of the "East" part of the address.

This section lists the subjects commemorated on the memorial on this page:
Sloane Court East bomb - pavement plaque

This section lists the subjects who helped to create/erect the memorial on this page:
Sloane Court East bomb - pavement plaque

This plaque to commemorate the 40th anniversary of the election of the first ...