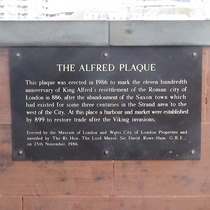 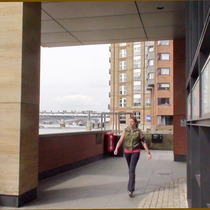 The Alfred Plaque
This plaque was erected in 1986 to mark the eleven hundredth anniversary of King Alfred's resettlement of the Roman city of London in 886, after the abandonment of the Saxon town which had existed for some three centuries in the Strand area to the west of the City. At this place a harbour and market were established by 899 to restore trade after the Viking invasions.

Erected by the Museum of London and Wates City of London Properties and unveiled by The Rt. Hon., The Lord Mayor, Sir David Rowe-Ham, GBE, on 25th November, 1986.

You get an insight into the mind-set of the erectors of this memorial from the title, in large capitals: not "King Alfred" or "Resettlement of London" but "The Alfred Plaque".

This section lists the subjects commemorated on the memorial on this page:
The Alfred Plaque

This section lists the subjects who helped to create/erect the memorial on this page:
The Alfred Plaque

Nancy's StepsThese steps and arch are surviving fragments of the 1831 London ...