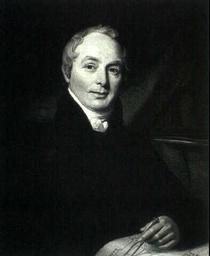 Architect. He could be either Thomas Cundy, senior (1765-1825), or his son; as their careers were closely intertwined. The identity of the portrait on the right is similarly doubtful. Cundy senior was appointed surveyor to the Grosvenor family's London estates in 1821 and was involved in the initial development of Belgravia. After his death his son took over the work. Considering that he held the position for forty-one years, it is likely that Senior is the person referred to on the Statue of Robert Grosvenor in Belgrave Square. He was also the architect responsible for many churches including St Paul's, Knightsbridge and Holy Trinity, Paddington. Died at Bromley, Kent.

This section lists the memorials where the subject on this page is commemorated:
Thomas Cundy

Hospital for women and children. Founded by surgeons Eleanor Davies-Colley an...

Built to house two congregations which had united following the loss of their...

The site now covered by Essex Street and Devereux Court was once Essex House ...