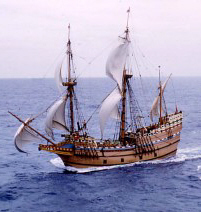 The ship that carried pilgrims from Britain to the New World. There were 102 passengers on board, who were mainly English, but included some Dutch and a Frenchman. It sailed from Plymouth, England. Its intended destination was the Colony of Virginia, but strong seas forced it to land at what is now Provincetown, Massachusetts. A child born on the voyage was appropriately named Oceanus. The picture shows a replica of the original ship.

Before arriving at Plymouth, the Mayflower left Rotherhithe (though some say Blackwall or Wapping) in mid July with about 65 passengers. The ship did not land where the famous Plymouth Rock (see the Union Chapel) now sits, but at Provincetown Harbor.

Note that the Mayflower was not the first ship of people intent on settling in the New World: The Susan Constant, The Discovery and The Godspeed set sail in 1606 from what is now Virginia Quay, where there is a commemorative monument.

July 2020: Southwark were planning "programme of events and activities building up to 2020" to celebrate the 400th anniversary of the sailing of the Mayflower. If any events happened they were probably fully masked and physically distanced.

This section lists the memorials where the subject on this page is commemorated:
The Sailing of the Mayflower