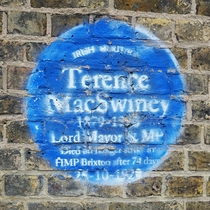 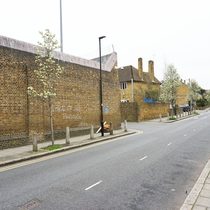 The design of this spray-painted graffiti is cheekily copied from the English Heritage blue plaques.

According to Wikipedia MacSwiney "was summarily tried by a court on 16 August and sentenced to two years' imprisonment at Brixton Prison in England. In prison he immediately started a hunger strike in protest at his internment and the fact that he was tried by a military court."  So the earliest the hunger strike could have started was 16 August, which is 70 days before his death, not 74. He had been arrested on 12 August which would give 74 days, if he had started the fast on arrest rather than imprisonment.

Google Street View shows that this 'plaque' was painted on the wall between May 2012 and September 2014.

This section lists the subjects commemorated on the memorial on this page:
Terence MacSwiney

This section lists the subjects who helped to create/erect the memorial on this page:
Terence MacSwiney

To the glory of God and in grateful remembrance of Mary Elizabeth Sumner who ...

The site of this building forms part of what was once the precinct of the Pri...

"God created man to be immortal" is from the Wisdom of Solomon 2:23.