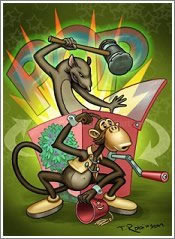 World Wide Words provides the following explanation:
Some of the references are now quite opaque, but we can take a fair shot at a few. In the second verse, the City Road was, still is, a well-known street in London, more than a mile long. The Eagle was a famous public house and music hall, which lay near the east end of the road on the corner of Shepherdess Walk; this had started its life as a tea-garden, but was turned into a music hall in 1825 (one of the very first); it ended its days as a Salvation Army centre and was pulled down in 1901. However, it was replaced by another pub, which still exists under the same name.

The City Road had a pawnbroker’s shop near its west end and to pop was a well-known phrase at the time for pawning something. So the second verse says that visiting the Eagle causes one’s money to vanish, necessitating a trip up the City Road to Uncle to raise some cash. But what was the weasel that was being pawned? Nobody is sure. Some suggest it was a domestic or tailor’s flat-iron, a small item easy to carry. My own guess is that it’s rhyming slang: weasel and stoat = coat. Either way, it seems to have been a punning reinterpretation of the catch line from the older dance.

This section lists the memorials where the subject on this page is commemorated:
Pop goes the weasel

Up and down the City Road In and out the Eagle That's the way the money goe...