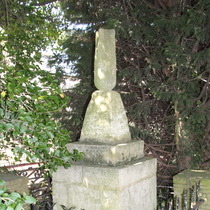 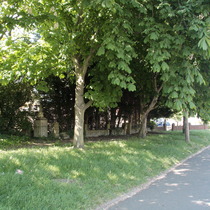 {On the four faces of the plinth, clockwise starting at the east:}

To those who in 1932 upheld the right to use bombing aeroplanes.

This monument is raised as a protest against war in the air.

The site of this monument is the property of Sylvia Pankhurst.  Design and work by Eric Benfield.

{This whole inscription is repeated on a metal plaque.}

Airplanes were used in WW1 but there was strong opposition to aerial bombing. The British argued in favour, needing to use the tactic on the north-west frontier in India. Already having seen the horror of WW1 bombing in London Sylvia Pankhurst was appalled at Mussolini's aerial bombing of Ethiopia (then known as Abyssinia).  In October 1935 she erected this monument as a protest in her own front garden at the Red Cottage.

The sculpture represents an 18 inch stone bomb on a plinth.   The dedication refers to the members of the League of Nation who, at a Geneva disarmament conference in 1932, retained their right to bomb from the air.  PMSA quotes the sculptor: “Those who had preserved bombing were politically and morally dead, and this was their gravestone”.

The monument was vandalised and the stone bomb stolen.  Benfield made another one and the monument was re-unveiled at an even bigger ceremony this time as a protest against Mussolini's use of poison gas in Ethiopia. The Blackshirts tried to smash it.  The first unveiling was 20 October 1935 but we have found two dates for the second: 21 June 1936 and 4 July 1936.

Most of the information here comes from an excellent article by Patrick Wright.

This monument is in what is left of the garden of Red Cottage, now demolished, where Sylvia Pankhurst lived.

This section lists the subjects commemorated on the memorial on this page:
Stone Bomb Anti-war Monument

This section lists the subjects who helped to create/erect the memorial on this page:
Stone Bomb Anti-war Monument

Prospective Socialist candidate for the Epping division in October 1935.