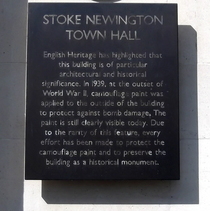 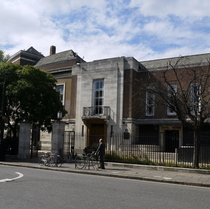 Stoke Newington Town Hall
English Heritage has highlighted that this building is of particular architectural and historical significance. In 1939 at the outset of World War II, camouflage paint was applied to the outside of the building to protect against bomb damage. The paint is still clearly visible today. Due to the rarity of this feature, every effort has been made to protect the camouflage paint and to preserve the building as a historical monument.

It is hard to understand how camouflaging a building could deter bombs, which by their nature do not discriminate in where they fall. We have contacted Hackney Council to try and find out if anyone knows the logic behind this, but to no avail. Strangely though, it appears to have worked, as although the surrounding area was badly damaged, the town hall escaped virtually intact. Part of the camouflage paint can be seen by the window next to the tree on the left of the photograph.

December 2020: Paul wrote to tell us: "My father George C. Carter was a councillor at the time and the driver for camouflaging Hackney Town Hall. The building was brand new and bright white. It was thought it could be used as a Navigation landmark by German aircraft. He was much criticised and verbally abused as the lovely new building was 'vandalized' with camouflage drab. That's the reasoning."

We thank Paul for that. We have heard elsewhere that efforts were made to minimise navigational assistance given to German pilots. So it would make sense to disguise what might be a landmark. The text on the plaque is misleading.

The Architects' Journal informs "... the assembly hall block ... includes panels from the Tudor manor house that once stood on this site...".

This section lists the subjects commemorated on the memorial on this page:
Stoke Newington Town Hall

This section lists the other memorials at the same location as the memorial on this page:
Stoke Newington Town Hall

The dates suggest that the terrace was built on the site of the Manor House a...

Queen's College, founded 1848. This college is an Independent Day School for...

This tablet commemorates the naming of this building in 1961 after the first ...