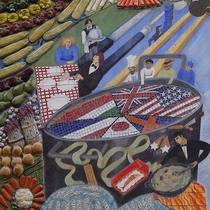 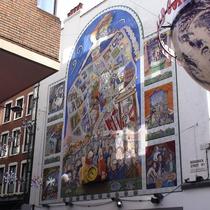 {On a nearby steel information panel:}
The Spirit of Soho mural was created by the Soho community and completed in 1991. It shows Soho life and is dedicated to the people of Soho. The mural depicts St Anne presiding over local notables; her skirt and petticoats show the map of Soho, craftsmen and London landmarks. Framed underneath are the portraits of Soho's many famous figures. Dogs and hares are interspersed which represent a time when Soho was a Royal hunting ground.

Restored in 2006 by Shaftesbury PLC and The Soho Society, the clock was re-activated by The Lord Mayor of Westminster 19th October 2006. Don't miss: When the clock strikes on the hour: watch actress and opera singer Theresa Cornelys winks at Casanova, Casanova blows a series of kisses to Cornelys and Karl Marx takes a sip of Coca Cola.

Interesting that Coca Cola are specifically mentioned on the panel but not as a sponsor. The hourly entertainment provided by the clockwork mechanism is subtle, even minimal - Fortnum and Masons this ain't.

The spelling of some of the personage's names is a little off: we've assumed that Edmund Keene refers to Edmund Kean.

The flame-haired St Anne holds out her skirt on which is depicted a map of Soho. Crowded below her lacey, fruity hem are some of the famous characters connected with the area. To left and right are six scenes representing a film animator in his studio (possibly Bob Godfrey), the fashion trades, food and international restaurants (pictured), the Palladium, Carnaby Street and Ronnie Scott's.

A green border at the bottom carries little pictures of, left to right:
Soho parish school
a dog and hare standing on a Union Jack
a Willow Pattern dish
Soho Street Theatre - presented by Alternative Arts

2020: Dominic Delargy has drawn our attention to Soho Bites which has podcasts about (at our last count) 15 of the people on the mural. One of those podcasts raised the question: Verlaine but not Rimbaud?

This section lists the subjects commemorated on the memorial on this page:
Spirit of Soho Mural

We initially identified the Mrs Bateman on the mural as the wife of Sidney Fr...

This section lists the subjects who helped to create/erect the memorial on this page:
Spirit of Soho Mural

A leading independent property company with an internationally diversified re...