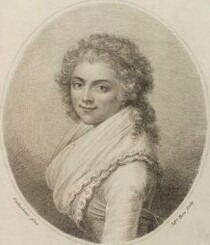 We initially identified the Mrs Bateman on the mural as the wife of Sidney Frances Bateman, theatre manager, initially at the Lyceum Theatre with her husband but on his death she carried on alone for 3 years and then moved to Sadler's Wells Theatre which she managed until her death.

2020: Dominic Delargy, of the excellent Soho Bites podcast about the Spirit of Soho Mural, contacted us. On the basis of the facial likeness he suggested that the Mrs Bateman on the mural is actually the actress who was active circa 1793. He then passed on to us some very helpful information he received from, Catherine Haill, a curator at the V&A. She confirms that the Mrs B on the mural is NOT the 19th century wife of Siddney Francis Bateman (1823-81). The Mrs. Bateman who lived in Soho is the subject of this National Portrait Gallery engraving.

I’m sorry to report that there really isn’t much I can tell you about the 18th century Mrs. Bateman though. The reason that she was included in the mural appears to be because she was one of the Soho characters who featured in the book Men and Women of Soho, published in 1903, and in turn from her inclusion in the 1895 book Soho and its Associations, Historical, Literary & Artistic, edited from the manuscripts of E.F. Rimbault by George Clinch. The problem is that neither account says much about her, not even her Christian names or her unmarried name. She lived at 1, Carlisle Street on the corner of Carlisle Street and Soho Square.

She had a benefit at the Haymarket Theatre in 1793 playing Lady Restless in All in the Wrong, a comedy by Arthur Murphy (1727-1805) at the end of which she performed a fencing bout against ‘the celebrated Chevalier D’Eon’. All in the Wrong had previously been performed at both Drury Lane and Covent Garden theatres. On 16th January 1893 Mrs. Bateman is said to have given what was described as: ‘an elegant entertainment’ to about 500 spectators at 12 noon, but the venue isn’t recorded.

She seems to me to be one of the hundreds of 18th century girls who fancied themselves as actresses and made it into companies on their appearance and willingness to perform onstage – not an occupation approved of at the time, and not one to be continued after marriage in most cases. I don’t think she was from a theatrical family, which was the other well-trodden route to fame on the boards for a girl. Her fencing display would have been a good excuse for her to appear in breeches on stage, thus attracting more patrons to come to her benefit performance for which she would have taken a percentage of the takings.

Our thanks to Dominic and Catherine for correcting our original error and sharing what they know.

This section lists the memorials where the subject on this page is commemorated:
Mrs Bateman