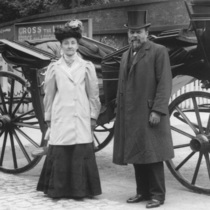 J.P., Christian philanthropist, the children's friend. Not to be confused with Sir John Kirk (1832-1922), the African explorer. Sir John's great great grandson, Peter Mitchell, contacted us to say he is currently writing a biography of his ancestor. In the meantime Peter has kindly provide this brief bio for us:

Born in the small Leicestershire town of Kegworth on June 10th 1847, John Kirk was the second of seven children born to Alfred and Maryann Kirk. Being born with a delicate constitution, the young lad pursued an interest in books at an early age and came to the attention of the locate curate, the Reverend Peter Lilly, who became an early mentor and life-long friend, and further cemented the moral values and social responsibility that would form the foundation of John’s fifty-four year career. After Alfred’s untimely death on May 12th 1862, the Reverend Lilly willingly took a larger role in the young teen’s passage to adulthood, and ultimately employed him as his assistant when he was appointed the first vicar of Collaton St. Mary’s. Shortly after, John, like so many of his generation, opted to find his destiny in the big bad metropolis of London. He was first employed as an assistant to the Church of England Book-Hawking Society in Paternoster Row at a starting salary of 12s. a week. His next post was through the Pure Literature Society where he met their Secretary Richard Turner, who was also serving as Superintendent of the Ragged School in Ann Street, Camberwell. Turner encouraged him to volunteer as a teacher at this institution, and it is here John Kirk found not only his career path, but his future wife, Miss Elizabeth Ayris. The young lovers communicated via letters written in Pitman’s Shorthand, and soon married on March 16th, 1872. They would give birth to seven children of their own, while working to improve the conditions of children in the streets of London through the Ragged School Union. Kirk’s involvement within the Ragged School Union soon grew to encompass the role of Night Inspector of Schools, and Assistant Secretary to the Union itself, which was still struggling to find its footing twenty years after its formation in 1844. In 1879, Kirk was appointed Secretary and it proved to be a match made in heaven as both his and the Union’s influence grew in London; in England; and in many countries throughout the Commonwealth. Crossing the class divides with ease, John Kirk was a friend to royalty and ragamuffins equally, and was dubbed “The Children’s Friend” .by all who knew him. When King Edward VII conferred knighthood on Mr. Kirk on Thursday, May 23rd 1907, the event made headlines around the world as rich and poor united in their congratulations. In 1909 Sir John was given the Freedom of London, and appointed a Justice of the Peace, a role in which he continued to labour on behalf of child reform. Although he passed away on April 3rd, 1922, just weeks after celebrating his Golden Wedding Anniversary with Lady Kirk, Sir John’s influence continues today. The Shaftesbury Lectures, which were initiated by Sir John to celebrate his fifty years of service and to pay tribute to the Seventh Earl of Shaftesbury, the Ragged School Union’s first president. These lectures are still an annual event.

This section lists the memorials where the subject on this page is commemorated:
Sir John Kirk

Children's storybook character. The creation of A.A. Milne, inspired by the t...