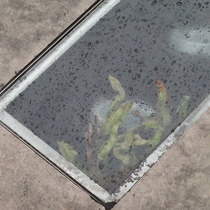 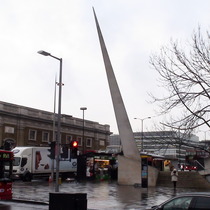 {No plaque that we could find.}

The inclined needle is made of Portland stone, 16m high. It won a Natural Stone Craftsmanship Award 2000. We could find no plaque and there is no pretty carving to photograph so for our close-up shot we have photographed the glass-covered cavity that holds the lighting, and a life-form that could have come from outer-space.

Although we can find no plaque or even official notice on-line, there seems to be general agreement that this Needle commemorates the spikes on London Bridge that used to bear the heads of those executed at the Tower of London.  It was erected as part of the Southwark Gateway project by Eric Parry Architects.  Picture of it being erected.  The project included an "emblematic" Tourist Information Centre and we wonder if that is now (2012) occupied by Evans Cycles.

2016:  The all-knowing Londonist has apparently solved the mystery of this spike.  They have discovered that, in an article in the 2014 Fortean Times, the architects explain that it is a marker.  "Tilted at 19.5 degrees to point down to a specific spot. Follow the trajectory of the needle downwards and it points to the riverside opposite the City church St Magus the Martyr. This is where the medieval London Bridge crossed the river."  The point described is usefully marked with a plaque: Old London Bridge.

We can't see it ourselves. There are lots of angles on the thing but the only one that could be 19.5 degrees is that from the vertical.  Surely if the needle is pointing anywhere it's into the sky?  Look at it in satellite view and you see its top is pointing south-west, while its lower end is pointing north-east on a trajectory that would cross the northern bank roundabout Old Billingsgate, far east of the old London Bridge. Are we missing something?

We conclude that this is an aesthetically pleasing object that possibly commemorates the bridge in an indecipherably abstract way.

This section lists the subjects commemorated on the memorial on this page:
Southwark Gateway Needle

Traitors’ heads used to be displayed on spikes on London Bridge, at the Stone...

This section lists the subjects who helped to create/erect the memorial on this page:
Southwark Gateway Needle

Of the four lions that used to flank the entrance to the Imperial Institute t...

Chosen as the featured memorial in May 2004 for two reasons. Firstly, it is v...