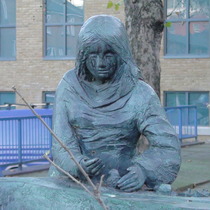 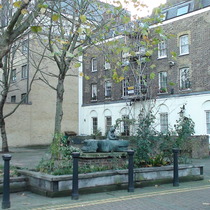 {On the plaque attached to the back of the plinth:}
This plaque was unveiled on 12th November 1987 by the Mayor Councillor Mrs Dorothy Winters to commemorate the social housing and nearby workshops which provide job opportunities for local people. These developments have been the result of the commitment of the local community, the Greater London Council and the London Borough of Southwark.

{On a nearby matching plaque:}
The Gatehouse Square development was designed by the Greater London Council for Southwark Council and constructed with funds provided by the Sea Containers Group. The pavement mosaics which decorate this square were designed and made by pupils from the following schools: Aylwin School, Snowsfields Primary School, St. James’ CofE Primary School, St. joseph’s RC Primary School, George Row, Tower Bridge Primary School.  The bronze figure "Great oaks from little acorns grow" was sculptured by Brian Yale.

The sculpture is titled "Great Oaks from Little Acorns".  From PMSA:"... holding her hands over an acorn which rests on the top of the wall. On her left, appearing to erupt from an amorphous mass at the rear of the wall, are various bottle-shapes and others that may be intended to represent small machine parts. The narrow top of the wall has a channel running along its entire length (The Thames?)"

This is a strange and, to our mind, not very successful piece of public art. It's stuck away in a parking area and the subject depicted is not clear. It was cold and the light was fading so maybe we just did not spend enough time to appreciate it.

This section lists the subjects commemorated on the memorial on this page:
Gatehouse Square, Southwark

This section lists the subjects who helped to create/erect the memorial on this page:
Gatehouse Square, Southwark

The lettering on the plinth does not look contemporary with the dove sculptur...

{Inscribed on a stone plaque on the plinth, on the east side:} Chelsea Emban...