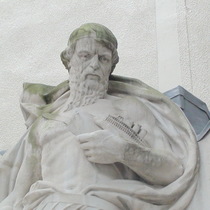 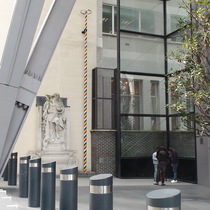 {On the plinth:}
Navigator

Given the dates of the sculptor (b.1883) the figure was clearly not on the 1884 building at no.122. Royal Museums Greenwich provide some information: "... the figure of ‘Navigation’ originally stood ... looking down from a recess in the facade at the junction of Leadenhall Street and St Mary Axe." The other addresses that P&O took over are all to the west of 122 whereas St Mary Axe is (or was, at the time) a few numbers to the east. However the 1940s-60s OS map shows a large single building occupying the whole of the corner with St Mary Axe, which suggests that P&O took over all the buildings up to St Mary Axe and built something with this figure on the corner.

In 1848 P&O moved into their new purpose-built offices at no.122. That building was replaced in 1969 with a glass-fronted office block, which itself was demolished in 2007-8 to make way for this Richard Rogers Cheesegrater.

This section lists the subjects commemorated on the memorial on this page:
Navigation

This section lists the subjects who helped to create/erect the memorial on this page:
Navigation

This section lists the other memorials at the same location as the memorial on this page:
Navigation

{At the centre of this circular plaque/low relief sculpture:}This plaque was ...

This memorial has its own webpage: Broadcasting House memorial. The 10 metre ...

Believed to be the first public sculpture in London commissioned by a Livery ...