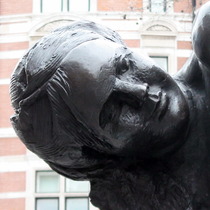 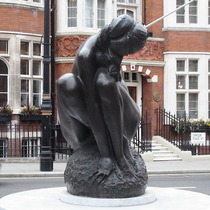 {On the marble plinth:}
A gift to the City of Westminster from the President of the Italian Republic, 20th November 1987, sponsored by the Italian Banks in London.

{Inscribed on the base of the statue:}
Emelio Greco 1973

Statue gifted to Westminster City Council by Francesco Cossiga, the then President of Italy, in 1987. In July 2011 a large water feature (more of an overflowing pond) was unveiled. It is lit at night and produces a cloud puff around the trees at noon and at about 10 to 2pm (well, that's our experience).  A plaque in the ground to the north of the water feature reads "Silence by Tadao Ando, 2011. Commissioned by the Connaught Hotel, Grosvenor and Westminster City Council".

When "Silence" was unveiled Cllr Colin Barrow, Leader of Westminster City Council, said: " ... It is particularly poignant that the fountain outside the Connaught Hotel bears a memorial to Sir Simon Milton, who as Leader of the council did so much to pioneer the joint working between the private and public sector that has brought such improvements to the city." Trouble is, we can't find anything at the site which mentions Milton.

2013: In the sculptor's centenary year the Estorick Collection are holding a one-man show.

This section lists the subjects commemorated on the memorial on this page:
Sir Simon Milton - nymph and pool

This section lists the subjects who helped to create/erect the memorial on this page:
Sir Simon Milton - nymph and pool

{Plaque on the south end:}This trough was donated to the City of London in 18...