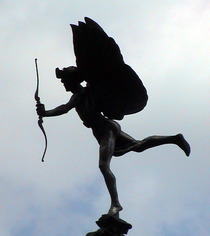 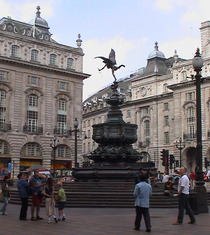 {Around the base, on a series of six panels, just above the basin into which the water flows:}
Erected by public subscription to Antony Ashley Cooper, K. G., seventh Earl of Shaftesbury. Born April XXVIII, MDCCCI. Died October 1 MDCCCLXXXV. During a public life of half a century he devoted the influence of his station, the strong sympathies of his heart and the great powers of his mind to honouring God by serving his fellow men. An example to his order, a blessing to this people and a name to be by them ever gratefully remembered.
{The dates given in Roman numerals translate as: Born: 28/4/1801. Died: 1/10/1885.}

The 1893 statue commonly known as 'Eros' was apparently erected as his brother, Anteros, the 'Angel of Christian Charity', but it is so often identified as Eros by very reputable sources that we are not sure. The statue is the first to be made of aluminium. The fountain is bronze, or copper, depending on source. Note the (poor) pun in the choice of motif, an archer, and "Shaftes-bury"'s name; surely this was unintentional.

From:johncoulthart:
". . The model for Eros was one Angelo Colarossi . . "

Eros balances, tippy-toes, at the pinnacle of this ornate finial of a fountain.

2017: Londonist posted a very weird photo of the inside of the statue.

2021: Londonist (intermittently obsessed with this statue) informs that at least 10 casts of the statue have been made.  One was in the nearby Trocadero centre and was sold at auction in 1997 to a Lancashire philanthropist who erected it in Fleetwood.

This section lists the subjects commemorated on the memorial on this page:
Shaftesbury Memorial Fountain - Eros

This section lists the subjects who helped to create/erect the memorial on this page:
Shaftesbury Memorial Fountain - Eros

From:johncoulthart: ". . the model for Eros was one Angelo Colarossi whose f...

Interesting that no artist is named for this sculpture. As far as we can tel...