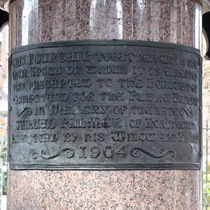 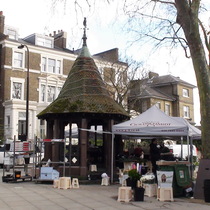 This fountain together with the open space on which it is erected was presented to the Borough of Hampstead for the public benefit in memory of the late Samuel Palmer of Northcourt, Hampstead by his widow and family. 1904

This 1866 map shows Abbey Farm Lodge on roughly the same footprint as Northcourt.

2017: Maybe we are just unlucky but every time we come here this fountain-shelter is lost in amongst the florist's stuff. They are taking the micky, really, aren't they? We don't know who is responsible for the Christmas lights but, from Google Street View it seems they went up in winter 2014 and have not been taken down since then. Also the decorative finial has been topped with what looks like a stuffed duck. Our feeling is that someone needs to restore some dignity to this little building - Camden Council, we're looking at you!

The red and grey brick building immediately to the south of this shelter (outside our photo, to the left) is 40 College Crescent, the house built by Palmer. From Lost Hospitals of London we learn that Palmer bequeathed the house to a hospital charity and that it was, 1904-48, a children's hospital. Then it was used for training nurses, then as a nurses home. It was sold in 1995, became a budget hotel and is now, 2018, Palmers Lodge, a backpackers' hostel.

This section lists the subjects commemorated on the memorial on this page:
Palmer fountain

1857 joined his brother, George, in the family biscuit firm, Huntley and Palm...

This section lists the other memorials at the same location as the memorial on this page:
Palmer fountain

This drinking fountain was restored by The Heath &amp; Old Hampstead Society ...

{On a long bronze plaque across the top of the basin:}To the Guy's men who di...

We feel the date probably gives a clue to what this substantial fountain was ...

The MDFCTA site says it was erected in March 1888 and was the gift of Mrs Swa...