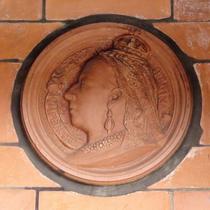 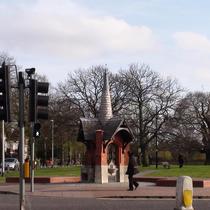 {Inscribed on the south side to the left of the fountain basin:}
Erected in the year 1897 by the parishioners of Wanstead to commemorate the 60th year of the reign of Her Majesty Queen Victoria.

{and inscribed to the right of the fountain basin:}
Longitudo dierum in dextera eius et in sinistra gloria.

The Latin quotation is interesting. It is from the Bible, Proverbs 3;16, and our Latin consultant, David Hopkins, translates it as "In her left hand is long life and in her right hand is honour". The quotation normally has "riches" in her right hand as well as "honour" but this has been omitted, presumably because no one needs, or wants, reminding of how rich the monarch is. David also points out that the “her” in the original bible passage is referring to wisdom, but here they are applying these attributes to Queen Victoria. Seems to us they've twisted the passage to suit their own ends, but perhaps that is quite common.

This memorial is three-sided. On the south side, shown in our picture, there is a drinking fountain and basin with texts to either side. The north-west side has a drinking fountain and basin and the medallion bust of Queen Victoria on the brick gable. The north-east side has the inscribed animal drinking trough. At the centre of the edifice there is some ornate ironwork which looks as if something is missing. We wonder what else used to be there, a gas lamp perhaps?

The south-east corner of George Green is connected to St Mary's Wanstead by St Mary’s Avenue. This is flanked by a double line of horse chestnuts, also planted in 1897.

Originally this fountain was at the centre of the junction. Road widening schemes have caused it to be moved a number of times; indeed it currently sits on top of an underpass.

This section lists the subjects commemorated on the memorial on this page:
Queen Victoria's Diamond Jubilee in Wanstead

This section lists the subjects who helped to create/erect the memorial on this page:
Queen Victoria's Diamond Jubilee in Wanstead

Merged with Woodford Urban District Council in 1934.  Merged with Ilford and ...

Chairman of the Wanstead District Urban Council in 1897.

{Plaque on wall to left of sculpture reads:} Eclipse by Angela Conner. The wa...

There is a non-working drinking fountain at the other end of the trough.