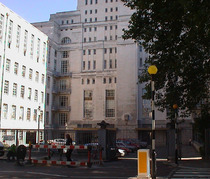 This stone was laid by His Majesty King George V on the twenty-sixth day of June 1933 in the twenty-fourth year of his reign. Her Majesty Queen Mary being present on the occasion.

The University has a grainy film of the ceremony when this stone was unveiled. It was a very grand occasion, attended by 3,000 people including Prime Minister Stanley Baldwin, the Archbishop of Canterbury and representatives of education from all over the world. The King and Queen arrived in a horse-drawn carriage and first inspected a guard of honour. There was a procession of men in mortar-boards and ermine gowns. All for the laying of a foundation stone.

As part of the ceremony the King packed and buried a casket containing newspapers of the day, a programme of the event, etc. It also contains a 1933 penny, one of only about 8 that were minted. The Royal Mint had decided that no pennies were need for the currency that year and so the only pennies that were minted were for burying under buildings, plus one or two for museums. Thus the penny in this casket is worth a "pretty penny" (sorry). We've heard that the casket is buried very deep, not just behind the foundation stone - that would be stupid.

Senate House and the surrounding buildings were planned as phase 1 of a huge complex which would have taken in all the land to the north between Malet Street and Woburn Square, up to Byng Place. Senate House was built as, and remains, the administrative centre for the University of London.

This section lists the subjects commemorated on the memorial on this page:
Senate House

This section lists the subjects who helped to create/erect the memorial on this page:
Senate House

Plaque unveiled by Sir David Attenborough and, unusually by one of those comm...