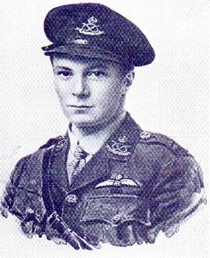 Aviator. Born at 13 Vicar's Hill, Lewisham. In WW1 he was a lieutenant in No. 66 Squadron of the Royal Flying Corps. On 30 March 1918 near Mansuè, Italy, he and two other officers, shot down one of five enemy aircraft. He then attacked an aerodrome where several aircraft were either landing or taking off. He destroyed one of them, and then seeing a fellow officer in trouble, went to assist him. He eventually was forced to retreat, but repeatedly turned to attack enemy planes following him, until he was finally forced down. He was awarded the Victoria Cross.

In addition to the information shown in our Picture Source, researches also show that in the 1901 census he was living at 2 Vicars Hill, Lewisham, with his parents and a female domestic servant.

The 1911 census shows him as a schoolboy, boarding with 20 other pupils between the ages of 10 and 14 years in a 16 roomed property called The Berrystead, Oundle, Northamptonshire, the home of Malcolm W. Brown, who was an assistant master at Oundle School, together with Mrs Winifred E. Brown and their two sons, a nursery governess, a sick nurse, a cook and two housemaids.

The 1939 England and Wales Register shows him as a retired Flight Lieutenant living in Littlepark, Salty Lane, Ringmore, Teignmouth, Devon, with his wife.

Probate records confirm that his address had been Solway Cottage, Lyme Road, Uplyme, Lyme Regis, Dorset, and that he died, aged 70 years, on 15 May 1968. Probate was granted on 5 September 1968 and his effects totalled £46,181.

This section lists the memorials where the subject on this page is commemorated:
Flight Lieutenant Alan Jerrard, VC