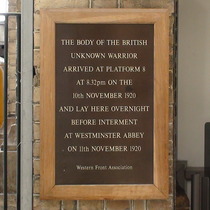 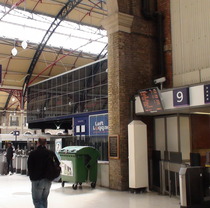 The body of the British unknown warrior arrived at platform 8 at 8.32pm on the 10th November 1920 and lay here overnight before interment at Westminster Abbey on 11th November 1920.
Western Front Association

The vehicle used for the delivery was the Cavell Van, the railway wagon which had previously been used for two ceremonial journeys from Dover to London: on 15 May 1919 carrying Edith Cavell's body; on 15 July 1919 carrying the body of Captain Fryatt. Following that first journey all wagons of this type were known as Cavell vans. See Western Front Association for more information.

There is a plaque in Dover: "Near this spot on the 10th November 1920 the body of the Unknown Warrior was brought ashore from HMS Verdun on the way to its final resting place at Westminster Abbey. The Dover Society 1997".

Between platform 8 and 9, before the ticket barrier. A small remembrance service takes place here each year on 10 November.

This section lists the subjects commemorated on the memorial on this page:
Unknown warrior arrival

This section lists the subjects who helped to create/erect the memorial on this page:
Unknown warrior arrival

On this site stood six successive Livery Halls of the Cordwainers' Company fr...

The clock in the tower above was repaired and renovated after damage by enemy...