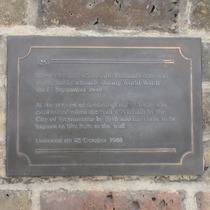 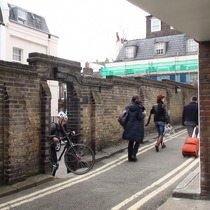 This boundary wall of the Rutland Estate was destroyed by a bomb, during World War II, on 25 September 1940.

At the request of residents a right of way was established when the wall was rebuilt by the City of Westminster in 1948 and has come to be known as 'the hole in the wall'.

City of Westminster
Unveiled on 28 October 1988

On the map of 1862, when this area was first developed, it looks as easy to travel north-south on what is now Rutland Gate/Rutland Street as on Montpelier Walk, so we did some investigation.

The Survey of London has answers:  “During the next six years {1853 – 9} the whole of southern Rutland Gate was built up by Elger, together with Rutland Mews East and West and a roadway linking Rutland Gate with his development on the Kingston House estate {to the west}.  It was presumably at this time that the high brick wall along the south side of Ennismore Street was built, shutting off Brompton Road and its northern hinterland from the exclusive culs-de-sac opposite Hyde Park. Since the Second World War a footway has been opened between Rutland Mews East and Rutland Street, which goes some way to alleviating the isolation of Rutland Gate from Brompton Road and the area of Montpelier Square.”

So the wall was deliberately created to create/maintain a physical class separation.

This section lists the subjects commemorated on the memorial on this page:
Rutland Estate - hole in the wall

This section lists the subjects who helped to create/erect the memorial on this page:
Rutland Estate - hole in the wall

The Forgotten IrishIn commemoration of that generation of post World War II I...

Either this plaque is a joke or there is something special about the toilet. ...