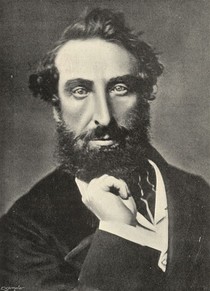 Novelist, poet, playwright, and politician. Secretary of State for the Colonies 1858-59.

Brought up in London. It must have been a dark and stormy night when he met Rosina, who he married in 1827, for 6 years later they separated on very bad terms which got a lot worse, very publicly: she calling him 'Sir Liar-Coward Bulwer Lytton' and accusing him of murdering their daughter; he having her committed to an insane asylum. The scandal-sheet readers of the day must have loved it.

Heir to his mother's fortune he formally added her family name, Lytton, to his when she died in 1843. He was extremely close to her, and the family home, Knebworth, apparently contains a room kept exactly as it was at her death, at his instructions.

Father of Robert Bulwer-Lytton, 1st Earl of Lytton, Viceroy of India. Died at Argyll Hall, Torquay, where he had gone for his health.

This section lists the memorials where the subject on this page is commemorated:
Edward Bulwer Lytton, 1st Baron Lytton

Property expert and Vice-Chairman of the Board of Guy's Hospital in 1964.