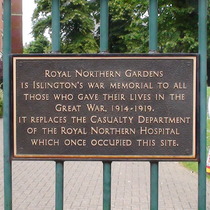 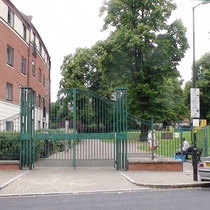 Royal Northern Gardens is Islington's War Memorial to all those who gave their lives in the Great War, 1914 - 1919. It replaces the Casualty Department of the Royal Northern Hospital which once occupied this site.

An information board, just to the right of our photo, says:

"Royal Northern Gardens occupies part of the old Royal Northern Hospital site (1923 - 1977), including the former Nurses Home and St David's wing.  Further west was the Casualty Department, now demolished, which was built by public subscription and dedicated as a war memorial to over 1300 Islingtonians who gave their lives during the First World War.
The retained memorial arch has been combined with Sherard Court to the left of these gates, while much of the original decorative masonry, including the Casualty Department's plaque dedicating it as a war memorial, has been reclaimed and incorporated into the park's memorial wall.
At the base of the memorial wall is a mosaic designed by children from Grafton School in 2002 depicting scenes form the Casualty Department."

We've identified the "memorial arch" and it will be the subject of another page when we've gathered the information.

This section lists the subjects commemorated on the memorial on this page:
Royal Northern Gardens gates

{Beneath a Maltese cross:}Hern or Hurn CrossNear here once stood one of the f...