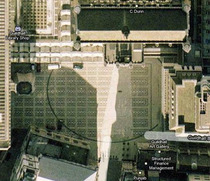 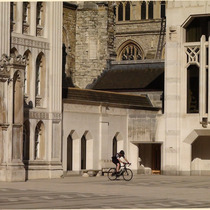 Our picture comes courtesy of Google Satellite view. A visit to the Guildhall Art Gallery includes access to the remains of the amphitheatre. It was discovered when the new Art Gallery was being built in 1987 and, being recognised as an Ancient Monument, it was legally protected. This delayed the work on the Art Gallery until 1993. The building was redesigned to incorporate the remains but ingeniously they are effectively suspended inside the basement with two further basements below.

Only discovered in 1987 but the space the amphitheatre occupied had remained an open space for centuries.   Psychogeography gets a bad press nowadays but this could be a real instance of a place having a “memory”.

Our picture shows the north-east corner of the Yard. The cyclist is in front of the two benches. The plaque is carved on the panel on the building to the left of the benches. You can just see the Whittington statue in the square opening to the right. All the ground in the Yard used to be part of the Roman amphitheatre which is marked with an oval of black stones, not visible in our picture but view this location in Google Maps satellite view and you see it clearly - some people probably claim that it's visible from the moon.

This section lists the subjects commemorated on the memorial on this page:
Roman amphitheatre

This section lists the other memorials at the same location as the memorial on this page:
Roman amphitheatre

{On a bronze plaque embedded in the seat, around a crest:} The United Wards ...

This east wing of the south front of the Guildhall was restored in 1910 accor...

This section lists some other interesting Ghost buildings

When we photographed the stone we did not notice the rectangular clearing aro...

On Park Street there's a plaque for the Globe but behind that, and possibly m...

Lines laid out in the grass can just be seen in our photo. They indicate what...

The excellent Greenwich Phantom tells us that the footprint of the old church...