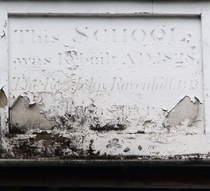 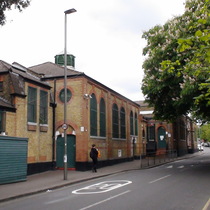 From Morden: "1824. Needful to enlarge the school, .. to ask Mr, Rice if he would sell adjoining cottage.. He declined to sell. Two new Schoolrooms to be built at west-end of School. ... 1825. .. Mr. Piatt assented to the bank at the back of the School being enclosed... 1827. Mr. Rice offered the Cottage upon terms that the Charity could not accept, .. but were willing to have the matter arbitrated upon, and will wait a month for his reply... Architect to prepare a plan for adding to school, Mr. Rice to have legal notice that the wall of the School House will be taken down. 1828. Mr. Rice offered his Land and Cottage for £200. Offer accepted."

From the paintwork etc. it would appear that all the buildings (3 or 4?) in our photo are now one, though they may not always have been. The Gassiot plaque can be seen in our photo, the white shape between the pedestrian and the railings. The Ravenhill plaque is above the door to the far right of our photo.

St Nicholas, the parish church of Tooting Graveney, is almost immediately opposite this building. The 1871-82 map from British History Online shows the church and, opposite, a "National School - boys and girls" on this site (at the right, two thirds of the way down).

The source of practically all our information is The History of Tooting-Graveney: Surrey, 1897, by W. E. Morden:"... in 1784, it was decided to obtain a place for a school, and a master to teach the children. In 1792 it was determined in Vestry that a charity school should be erected for the benefit of the poor boys and girls of the parish. A public subscription was opened, trustees appointed, and a site for the building obtained from the Lord of the Manor at a peppercorn rent for 999 years." There is no mention of the school moving so we believe this is the site so obtained.

This section lists the subjects commemorated on the memorial on this page:
Ravenhill

Rector of St Nicholas Tooting Graveney in 1828 when the school was rebuilt an...

This section lists the other memorials at the same location as the memorial on this page:
Ravenhill

Surely anyone who decides to repaint a plaque should first check what the ins...

The Tricycle Cinema was opened by Emma Thompson on 12th November 1998.Bringin...

To the memory of James &amp; Margaret McCurrey, early &amp; devoted workers i...