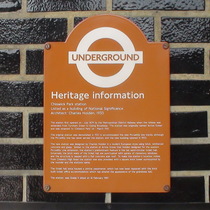 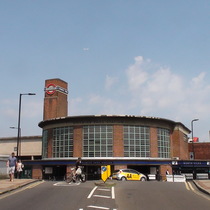 Underground, Heritage information
Chiswick Park station
Listed as a building of National Significance
Architect: Charles Holden, 1933
The station first opened on 1 July 1879 by the Metropolitan District Railway when the railway was extended from Turnham Green to Ealing Broadway. The station was originally named 'Acton Green' and was renamed to 'Chiswick Park' on 1 March 1910.
The original station was demolished in 1931 to accommodate the new Piccadilly line tracks, although the Piccadilly line has never served the station, and the new building opened in 1933.
The new station was designed by Charles Holden in a modern European style using brick, reinforced concrete and glass. Similar to the station at Arnos Grove that Holden designed for the eastern Piccadilly Line extension, the station's predominant feature is the tall semi-circular ticket hall. Externally the brick walls of the ticket hall are punctuated with panels of clerestory windows and the structure is capped with a flat concrete slab roof. To make the station's location visible from Chiswick High Road the station was also provided with a square brick tower surmounted by the roundel and the station's name.
The ticket hall once housed a central passimeter, which has now been replaced with the brick built ticket office accommodation which has altered the appearance of the grandiose hall.
The station was Grade II listed on 18 February 1987.

Love all the architectural terms. We had to look up passimeter and it's roughly what we'd call a ticket booth, here's the very one.

This section lists the subjects commemorated on the memorial on this page:
Chiswick Park Station

Formed to complete the 'inner circle' of the tube in London.  This was effect...

This section lists the subjects who helped to create/erect the memorial on this page:
Chiswick Park Station

In 1997, as a condition of developing the RNH site, Bellway Homes (the develo...

This stone was laid for the glory of God by the Mayor of Hackney, T. E. Young...

Morton Hotel is part of Imperial London Hotels Ltd who own the building.