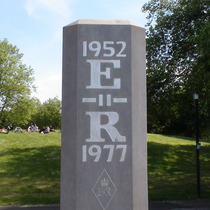 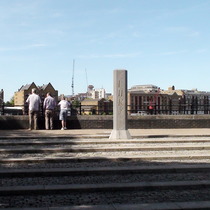 This memorial has provided terrific value.It was first erected for the Silver Jubilee with just one short inscription (photoed) which does not even feel the need to say "Silver Jubilee" nor specify the date nor the dignitaries involved in the unveiling. 25 years later the other side was inscribed in a similar fashion for the Golden Jubilee, this time with the unveiling details and thus the whole side was filled, but still there is no reference to the type of Jubilee being celebrated. 10 years later, the space available on the first side was used for the Diamond Jubilee and this time not only are those words used but a diamond shape is drawn. It's full now - what will be done should the Queen make it to Blue Sapphire (65)?

The round plaque is laid in the ground, land-side of the monument.

London Screen Archives have a film, made by the London Borough of Southwark Public Relations, of the unveiling by the Queen of this stone, or rather, this stone before it got cut down.  The monument she unveiled had a lot more to it.

This section lists the subjects commemorated on the memorial on this page:
Queen Elizabeth II jubilees

This section lists the subjects who helped to create/erect the memorial on this page:
Queen Elizabeth II jubilees

This section lists the other memorials at the same location as the memorial on this page:
Queen Elizabeth II jubilees

We photographed this section of the cross to show the very unusual carving. ...