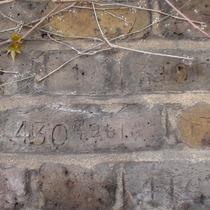 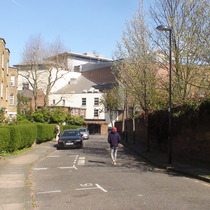 Brought to our attention by View from the Mirror which has a very good, thorough post about these strange bricks.  The graffiti is apparently mainly the collar numbers of policemen but some have added dates and initials.  British History On-line also reports on them giving dates around 1890-1910, but says "The origins of the custom remain obscure; boredom may be sufficient explanation."

The 'G' in many of the texts apparently indicates that the officer was from Finsbury Division, based at the King's Cross police station.

The wall is north-facing which makes it difficult to read, or photograph, on a sunny day. Probably best visited early or late, or possibly on an overcast day.

This section lists the subjects commemorated on the memorial on this page:
Police bricks

In 1830 local divisions, one for each borough and each with its own station, ...

{On a letter attached to one of the bouquets:}Dearest Marta Struck down too ...