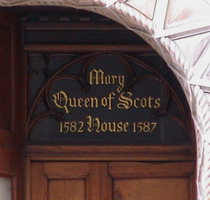 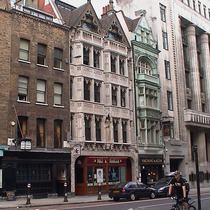 A nearby pub sign says "the building next door, Mary Queen of Scots House was built in 1905. The statue of Mary Stuart a romantic idea of the developer Sir John Tollemache MP, who was a great admirer of Mary Q of S."

The architect is R. M. Roe and Ornamental Passions tells us that he designed this ornate building for a Scottish insurance company.

This section lists the subjects commemorated on the memorial on this page:
Mary Queen of Scots House

Mary’s first 20 years were an amazing roller-coaster of a life. She spent the...

This section lists the other memorials at the same location as the memorial on this page:
Mary Queen of Scots House