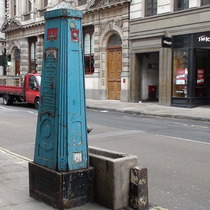 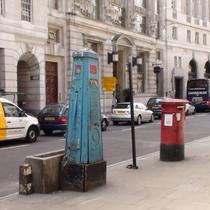 {On the panel facing the pavement:}
On this spot a well was first made and a house of correction built thereon by Henry Wallis, Mayor of London, in the year 1282.
{On the base:}
Phillips & Hopwood, Engine makers, fecerunt.

{On the panel facing the road:}
The well was discovered much enlarged and this pump erected in the year 1799 by the contributors of the Bank of England, the East India Company, the neighbouring fire officers, together with the bankers & traders of the Ward of Cornhill.

We understand "the neighbouring fire officers" to mean the four fire assurance companies represented by their insignia on the four sides near the top.

This section lists the subjects commemorated on the memorial on this page:
Cornhill pump

Mayor of London in 1282. Wikipedia gives "Henry le Waleys" as the name and sa...

This section lists the subjects who helped to create/erect the memorial on this page:
Cornhill pump

Londonist have an interesting post about animals at the Bank of England. The...

This section lists the other memorials at the same location as the memorial on this page:
Cornhill pump

On a nearby information board: Slade Fountain – This drinking fountain was in...

The translation is provided by our language consultant, David Hopkins. He po...

This market has been serving the citizens of Woolwich since it was created by...