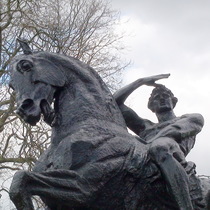 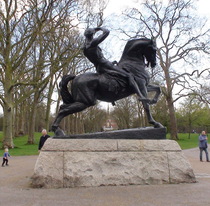 'Physical Energy' is G F Watts's sculptural masterpiece; a universal embodiment of the dynamic force of ambition.The artist himself described it as, 'a symbol of that restless Physical impulse to seek the still unachieved in the domain of material things'. Three bronzes were cast of this sculpture of which this is the second, the other two are in South Africa and Zimbabwe.

The full size model for this sculpture is on display at Watts Gallery, Compton, Surrey.

This centenary plaque was unveiled by HRH the Duke of Gloucester GC GCVO on 7th September 2007.

{Moulded on the base of the statue, at the front:}
Physical Energy by G.F.Watts, OM, RA

{Stamped on the base of the statue, right side:}
A.B.Burton, founder, Thames Ditton

We always knew about this statue but only realised it was a memorial in October 2016 when it was nominated by sculptor Steven Claydon as a statue he hates. Confirmed by Artsnet: "Watts was a willing, if muddle-headed, supporter of Rhodes."

We understand there are 3 (or soon 4) full-size versions of this sculpture, located: Cape Town, South Africa: Harare, Zimbabwe; here; on a hill near the Watts Gallery (creation and installation planned in 2017 for 2018).

Watts based the sculpture on one of his earlier works, an equestrian statue of the first Duke of Westminster.

What's that spire tickling the horse's belly? - the Royal Albert Hall doesn't have a spire. Correct, but the Queen's Tower rises, in perfect alignment, to appear above the Hall.

This section lists the subjects commemorated on the memorial on this page:
Physical Energy

Mining magnate and politician in southern Africa. Prime Minister of the Cape ...

This section lists the subjects who helped to create/erect the memorial on this page:
Physical Energy

Born in London. His piano-making father named him after Handel. Married brief...

Unveiled by Lucian Holland, Wilde's great grandson, who made the unveiling sp...