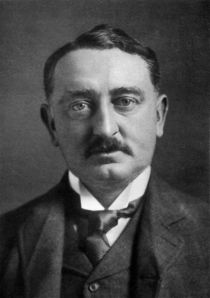 Mining magnate and politician in southern Africa. Prime Minister of the Cape Colony 1890-96. As a businessman he founded the southern African territory of Rhodesia (now Zimbabwe and Zambia), which the company named after him in 1895.

Born and grew up in Bishop's Stortford, made his fortune in the diamond trade with his De Beers company. A declared racist at a time when that was an acceptable position especially in the British Empire. Died South Africa.

The house in which he was born is home to a museum and arts centre, formerly known as the Rhodes Art Complex. In 2020, following the Black Lives Matter protests, the name was changed to the South Mill Arts.

2021: The 'Rhodes Must Fall' campaign, dedicated to the removal of a statue of Rhodes on the facade of Oriel College, Oxford, met a set back when an investigation into the issue came to the 'nuanced conclusion' that amounted to deciding to keep the statue. The college "will accept other proposals to improve equality and diversity amongst its students and academics. It will also work on the “contextualisation” of the relationship with Rhodes."

This section lists the memorials where the subject on this page is commemorated:
Cecil Rhodes

{On a plaque laid into the ground in front of the statue:} George Frederic Wa...

Designed by C. J. Phipps. The picture is taken from Cockspur Street. The buil...

In the late 1500s plays were performed in the inn-yard. The Inn was destroy...