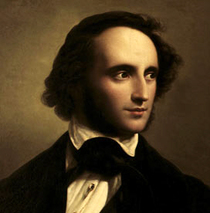 Composer. Born Jacob Ludwig Felix Mendelssohn in Hamburg. Bartholdy was a name already adopted by a member of his mother's family who had converted to Christianity and the Mendelssohn family added it to their name to dissociate themselves from the father's Jewish heritage. In a comparatively short life, he produced a prolific number of compositions, most famously, the oratorio 'Elijah', incidental music for A Midsummer Night's Dream and The Hebrides Overture. A frequent visitor to Britain, he became a favourite of Queen Victoria. Died in Leipzig after a series of strokes.

This section lists the memorials where the subject on this page is commemorated:
Felix Mendelssohn